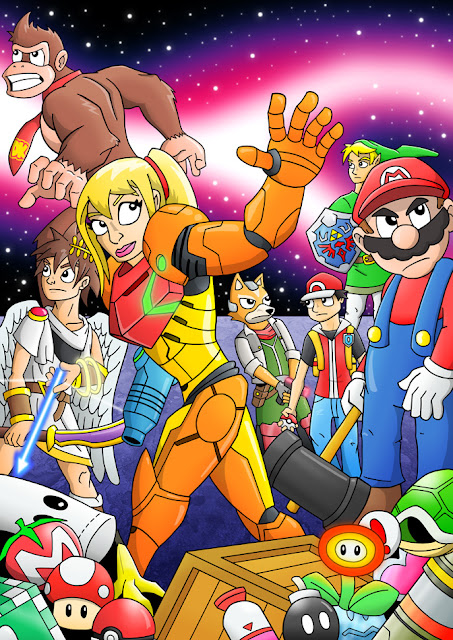 I like The Avengers. I like Super Smash Bros. So I drew the Smash characters posing as the Avengers did in their movie poster. I should add, I don't mix every two things I like. I enjoy bacon and showers, but I would never- hmm, actually...

Sadly, I'm not the first to have this idea. As I often find with my ideas, the internet got there first. However, those versions were different to what I imagined. The internet may have gotten there first, but they hadn't tasted my particular brand just yet. I wonder where that metaphor took your mind.

Despite my enthusiasm, this took a while. When I started this, Avengers Assemble may still have been in the cinema. Pokémon Trainer isn't even in Smash Bros anymore. I wanted to get the costumes and composition just right. I know the composition was already laid out for me in the poster but I was inserting different people into it. Mario's giant cartoon head, for example, doesn't quite match Chris Hemsworth's chisled jaw. A 3 year long process began of working on it, setting it aside, doing other things, working on it, setting it aside again.... when it was finally close to finish, my computer broke. My external hard drive had broken the same month. This drawing, including every other drawing I posted and was planning on posting on this website, was in danger.

"You've probably lost everything." I was bluntly told. But I decided not to listen to the disinterested shop worker who hadn't even seen the computer yet, someone who had to be cajoled into doing most of her job. Instead, I took it elsewhere to get fixed and my data recovered. That's a long story, but all you need to know is that it took time. It took money. And I'm very happy I finally got this assembled.