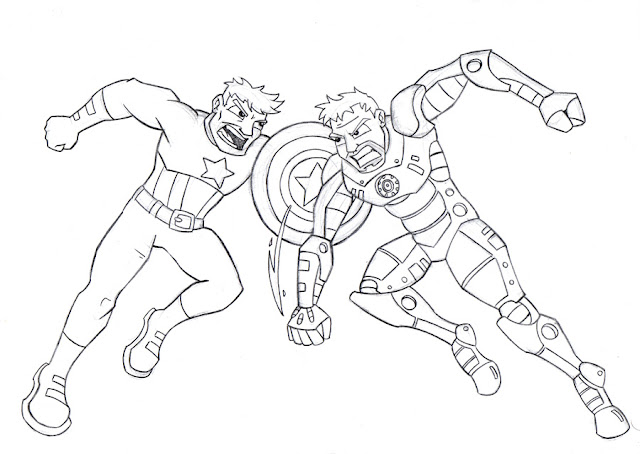 I ditched their masks so that I could draw angry facial expressions. Assume their masks fell off earlier in the scuffle. That'd be a less interesting movie title, wouldn't it? Captain America: Civil Scuffle. Masks seem to come off a lot in superhero movies, even when the characters are fighting. I suppose if you've paid millions of dollars for a certain actor, you want to see their face.

I haven't given Iron Man any specific armour here. He always seems to have a different suit so I invented my own, based on the theme 'I don't know anything about robotics oh my god I'll just make it up as I go along shit um okay better put some extra bits here to make it look more machinery'.
The only change I made to Captain America is losing the pouches he has on his belt. Okay, so they make him look more like a soldier, but Ive never seen him take anything out of them. It owuld be cool if he did. Bandages, sewing kit, a dry biscuit ration even though he fights in cities and there's three Starbucks literally right there.
Posted by Gnarlee at 23:41