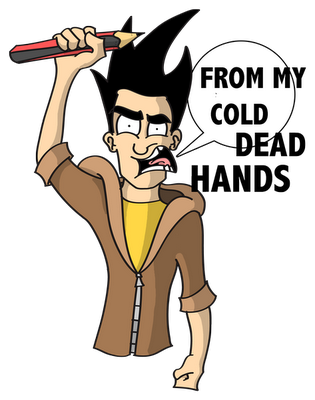 The spikey haired guy is not me, by the way. He's just a mascot for everything I do. Like Mickey Mouse is for Disney. Except mine's not steeped in racism and evil.

Hello, my name is Gnarlee.

Except of course it isn't really, that's just a moniker. My real name isn't hard to figure out, but I will tell you it's not Monica. I'm an illustrator, among other things, but you and I can focus on the illustrating part while my therapist deals with the rest.

When I was 8 years old I drew a picture of Fred Flintstone that I was very proud of, and from that moment decided to pursue art as a serious... pursuit. I later discovered this story is the same as Joe Madureira's, which is a bit irritating, so instead let's say I began drawing when the spirit of Leonardo Da Vinci handed me a pencil and said "Your turn."

I am now older than 8 but younger than 80. I've drawn a lot and have far more to draw, so it's probably about time I put it where people might catch it. It's something to look at.