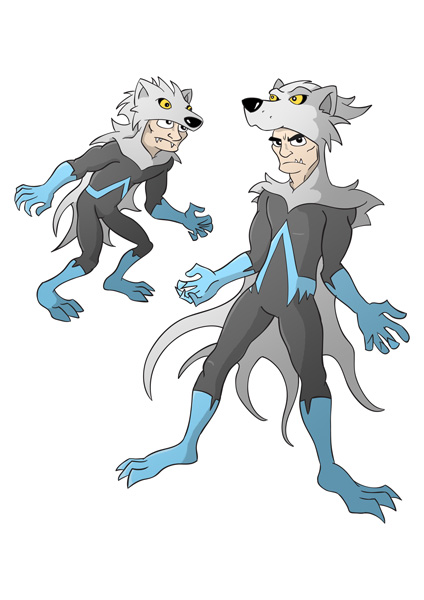 An arctic shaman. I don't truly know what a shaman is, maybe it's ignorant of me to assume they're the guys who wear animal pelts. I at least know they're an old culture connected to spirits and healing, though to be honest I'm still going mostly with the pelt... I rather liked the idea of the pelt turning him part-wolf, too and made him a bit of a superhero. The blue point on his suit represents a snowy mountain, the low spikes frozen drips of water. I know the technical term is stalactites, but I didn't know if you did. Maybe that's patronising (if you know what that means).

This drawing, like so many others in my blog now, started as imperfect sketching that ended up a complete thing. Which is entirely the opposite to my usual process of carrying complete things in my head, but wanting them to be so perfect I end up not drawing them at all. Of course, there's nothing wrong with planning. But there's still a lesson to be learned here: less perfection, more sketching. It's something I've known for a while and am slowly getting used to.

So this character really came out of nowhere, as have many others so far. Mostly, I've left them as they are to become whatever comes naturally to the viewer's mind. But I'm looking at this guy now and thinking I want to give him more stuff. The same goes for the detective last week and a few others that have potential. Suddenly it's 'screw your imaginations, these are my toys!' I'm thinking they should have names, backstories... futures?

No concrete plans right now, of course. It's just some good imperfect sketching.
Posted by Gnarlee at 17:04 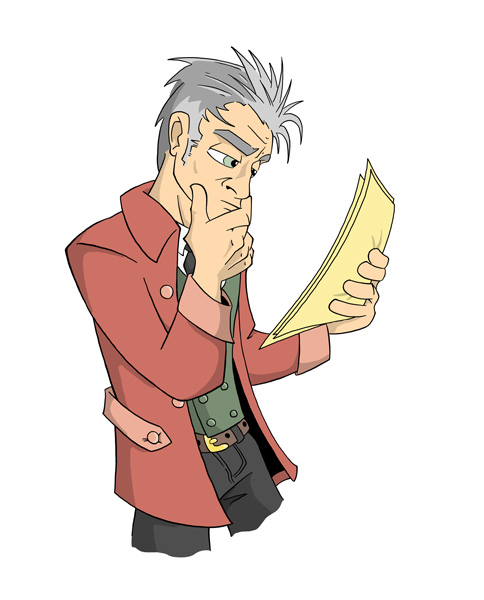 Dandy. My basic understanding is that it was a term used during the18th and 19th century to describe people who were eccentrically (but smartly) dressed, groomed, cultured and obsessed with themselves. I’m not sure what the origin of the term ‘dandy’ is but I suspect it was an insult these people appropriated because ‘prick’ and ‘asshole’ was less appealing. They remind me of hipsters.
My own desire to be a super-skinny indie douchebag is often thwarted by my hatred of arrogance and love of pastries.
All that leads to this drawing. I like that appearance stuff but I also like wisdom, modesty and wanting a better world. Hence this dandy also being a detective.
Posted by Gnarlee at 23:38 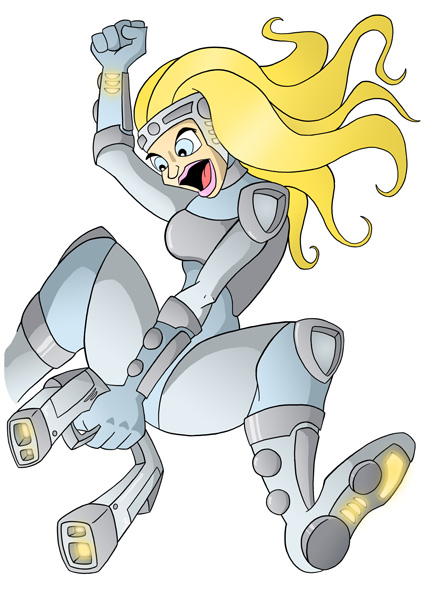 After last week's idyllic beauty I thought we'd go in a slightly different direction and have a screaming girl from the future jumping into your face with a laser gun. Keepin' it fresh.

I told a friend of mine I'd be updating with this girl today and he referred to her pose as being "somewhat dubious". Ha! A comment one hundred times more subtle than the drawing.

When I first sat down and began drawing this, I didn't think I would be drawing <i>this</i>. It just happened. I remember me and another friend (I have more than one friend, impressed?) sitting down with pencils and paper, he with a very specific illustration in mind, me sketching lines to see what would happen... huh, this is starting to sound like an apology. It's not.

Out in the Sticks - Day Six


If there's ever a TV show or movie about the countryside, this is where the bad guy/girl usually lives.

Concluding on a biggie! Upped the challenge on this one, picked a house with a lot of 'layers'.
Posted by Gnarlee at 21:12

Thus far I've been adoring of the country lifestyle, but now we get to the hard side. I used to visit a mate that lived in the country, and one day I fancied chocolate. In the town I live in, a shop is rarely more than 10 minutes away, thus a choclate is rarely more than 10 minutes away. But in the country, where he lived? 30 minute walk. Perhaps even 40. I remember that being a really difficult time.

Went with a sketchier style. I do that sometimes. Originally I wasn't gonna bother with the wall crawler because it was small, complex and just draped over everything. That's the benefit of sketchy style though. Instead of fretting over perfect lines (as I am prone to do), you just go for it.


I added reflections to the windows, which are working a pretty cool effect for just thin lines thrown down in a few seconds.
Posted by Gnarlee at 21:01

Village Cafés are cleaner than Town Cafés, and usually furnished like grandma's house. Actually, with the places usually having tea, sandwiches and cakes being served there by old ladies, you basically are just paying to be at grandma's house. Does that make grandma a whore? Yes, kids. Your grandma is a whore. And where's grandpa? Pretty much any man sitting apart from everyone else and tutting at his newspaper is grandpa. He won't say hello to you, but he angrily read at you sometimes.

Originally this took 1 hour and 40 minutes, but add on 30 minutes of going back to fix things. It was time well invested, because originally this was another building that looked like it was gonna fall over. You might be able to see the original shape in the blue sketch lines, where it's leaning too far back. But yeah, I sorted it. Because even though these are practice drawings and I'm not afraid to make mistakes, you gotta practice fixing them too.
Posted by Gnarlee at 22:04


Village pubs are wonderful. They're such quaint buildings, but inside you can get smashed off your noggin'. That's a good combination of things. Better than getting smashed in a smashed place, or doing quaint things in a quaint place. Smashed you + quaint place is what you want. Provided you don't smash it after.

Incidentally, I don't think I've ever used the word  'noggin'' before. It feels like a quaint word. Maybe the village theme is having an effect on me.

I drew this building to test myself on a slightly more complex structure than the others. Think I did alright.
Posted by Gnarlee at 20:58

I like how the lower buildings came out but the tower on the left is quite misshapen. Sure, I want my buildings to have more interesting shapes than reality's straight lines, but there's interesting and then there's imminent danger of collapse. People in there have basically forgotten all about God and are just praying to architects.

Still, I'm pleased with it overall.
Posted by Gnarlee at 21:29


Updates every day this week! Including the weekend? Maybe, baby.

I've been posting completed artwork of varied themes but what I haven't shared yet are my studies, or anything involving scenery, so here are my studies, on scenery. Let's go with a country theme because, uh, that's what I've been doing.

Side note; I use the word 'scenery' because there's something about the word 'background' that sounds like a chore. "Bah, I have to draw a background." becomes "Yeah, time for some scenery!"
Posted by Gnarlee at 23:41