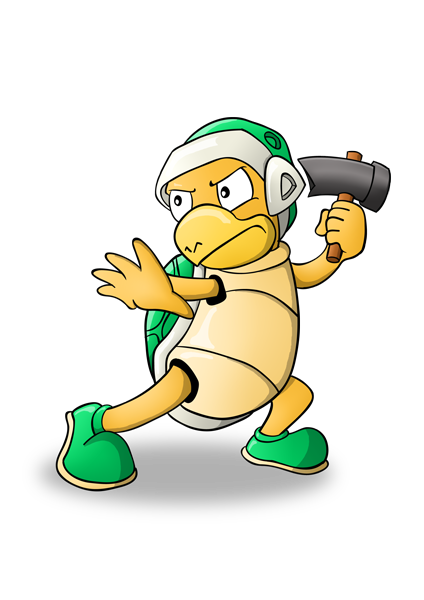 I thought I had drawn all the bad guys from the first Mario game. I relaxed, felt safe in victory, I grew plump and complacent. But I had missed one. The realisation struck  me like a hammer. I mean, it didn't really. I just needed a verbal link to the image.

I can't decide which of the bad guys in Mario made me more fearful as kid. Lakitu or the Hammer Bros. Lakitu rained enemies on the player but you could at least flee through the level. Hammer Bros would block your path. You had to wait for an opening in their attack or defeat them, which wasn't easy as their movements didn't seem to have a pattern. There were usually two of them, jumping between a pair of platforms, whilst throwing an erratic barrage of hammers, waiting for you to come forward.

And there was one moment I had forgotten. Or perhaps blocked from memory. If you hung around too long, waiting for the right moment to avoid or kill... they'd start moving towards you. I can't remember who was playing at the time when this first happened to me. A friend, a family member or myself. I just remember the screaming.
Posted by Gnarlee at 21:25