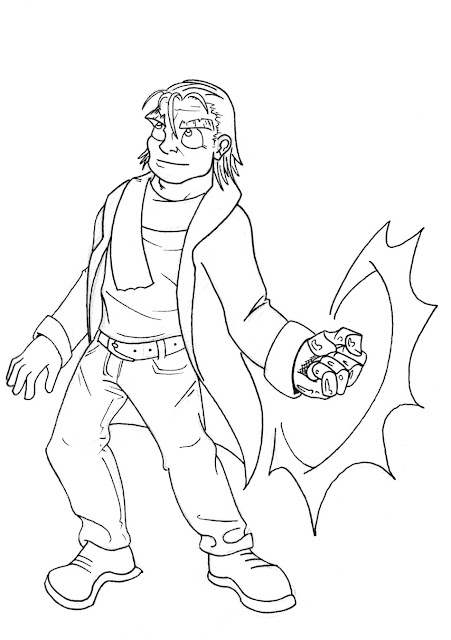 As I've mentioned here once or twice, or a million times, I like fantasy. So after getting all excited about drawing superheroes, I got bored, and moved onto another idea I had, and now I'm just expecting you all to go along with it.

A few years ago I was irritated by the fact most  main characters of fantasy, science fiction, or any adventure story were young and handsome. Which is weird, 'cos I can completely relate to that. Ghandi said 'be the change you want to see in the world' and I'm certain he was talking about comics, so I came up with an older character. He's fun to draw. A weathered but humoured look, strong jaw but kind eyes, grey hair and an iron fist. I'd heard the phrase 'rule with an iron fist' when I was a teen and I ended up taking it rather literally. 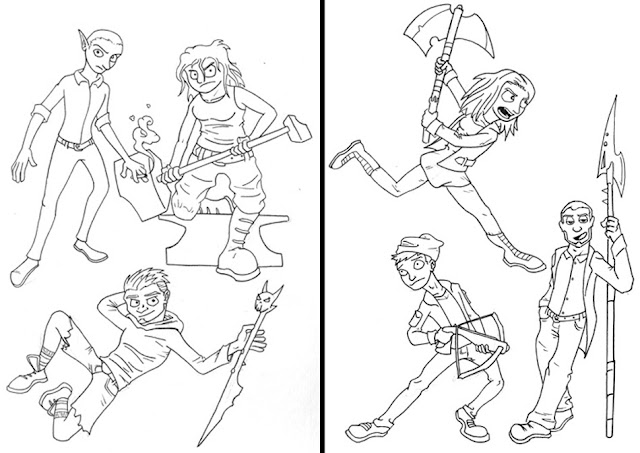 I like the idea of an elf with bad habits and a shaved head. Someone who's almost embarrassed to be eternally beautiful. I like the idea of a female blacksmith because why the hell not, and a warlock decked out in ripped jeans and a black hoody because cloaks are for those dull sorcerer types who take things way too seriously. In general, I'm against civilians owning weapons. But if they were ancient war axes, crossbows and pikes... I'd at least see the appeal. 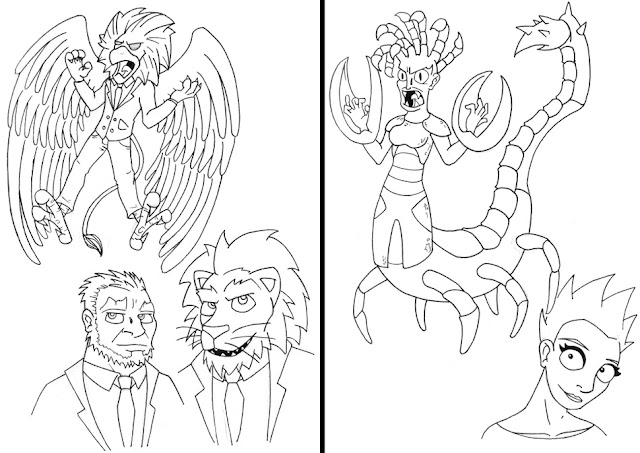 Griffins are part lion, part bird. But what's the top half? Bird, or lion? I drew both. I'll pick later. I know they tend not to own suits but 'griffin' could so easily be the name of a powerful corporation. That scorpion lady is my version of a gorgon. Traditionally, they're snake-haired and serpent-bodied. But we've seen that before. Hair of scorion tails. Claws wrapped around hands. How does she open doors, you ask? I'm sure the people fleeing ahead of her will solve that problem. 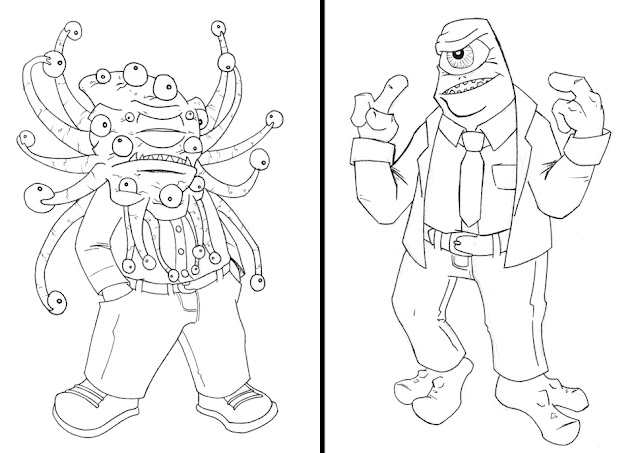 Though all those tentacles and eyes tested my patience, I at least had the cyclops to balance it out afterward. I made each of those eyes look in different directions. Who knows what they're really looking at, or where, or when. Whilst drawing him, I thought it would be interesting that not only would he have a giant, central eye, but that it would be the only one that is always closed. The cyclops, having only just one, tends to make a big deal about it. Like the griffin, they're in suits. Monsters in suits. There's something about it. 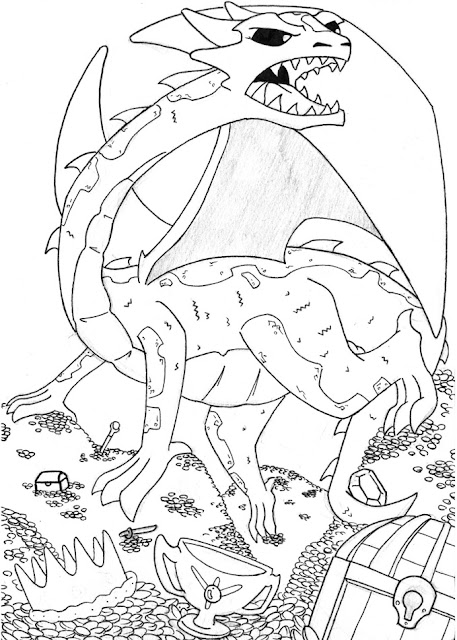 Was Smaug the first dragon to be depicted upon a mountain of treasure, or was it a traditional idea that Tolkien used in his own story? I sure hope it's the latter, 'cos this would be mine. Hence the title. 'Not Smaug.' Drawing those coins began as a chore, but I ended up drawing so many my mind switched off and I almost enjoyed it. Almost. Making up random treasures to dot around was fun though.

That big dragon pic was the climax of my sketchbook. As tempting as it was to draw another figure so that I could end my first book and hold it proudly, I wanted to end big. Now I can *really* hold it proudly. Thanks for looking.
Posted by Gnarlee at 23:41

There's really no reason for her to be wearing a white coat. She's out fighting. But I like how it looks. It's a doctor's version of a cape.You might be wondering why the solider has one small gun and one large gun. It's because I like the dynamic difference between the two. It's because he relies on skill as much as power. And it's because I had to make the gun smaller to fit on the page.
I was pondering a new type of visual, and a guy with giant detached eyeballs was what I came up with. I remember a satisfying moment when I showed a friend and he said 'urgh'. That was an older sketch though when I made them gooey. They don't need to be gooey. It's gross enough. I hope his handsome face and thick stylish hair will counter too much 'urgh'. Plant Kid wants to be tough but has this embaressing problem where pretty flowers grow out of him. But if his ego gets bruised to much, he can always pull out some giant thorned vines and Dionaea muscipula. He wouldn't know that's what they're called though.


Blood doesn't come out of clothes, so she doesn't wear clothes. I developed a trait in the sketchbook where I would draw women holding a knife, and their body would end where the blade is. The Knife Girl sketches had it yesterday.A rough guy covered in boils that can be fired off like little cannon balls sounds like perfect villain material, so on that basis I made him a hero. Naturally.


I always thought portals were cool. Jumping into them, flying through a tunnel of spiralling light and then popping out somewhere new and exciting. So a guy who could just conjure them up whenever to wherever he wants seemed really interesting to me. The energy he's surfing on? A bonus. I figured it'd give him a better entrance than clumsily falling out the portal.

That's it for the superheroes. But not for the sketchbook. See you tomorrow for the final round!
Posted by Gnarlee at 22:06 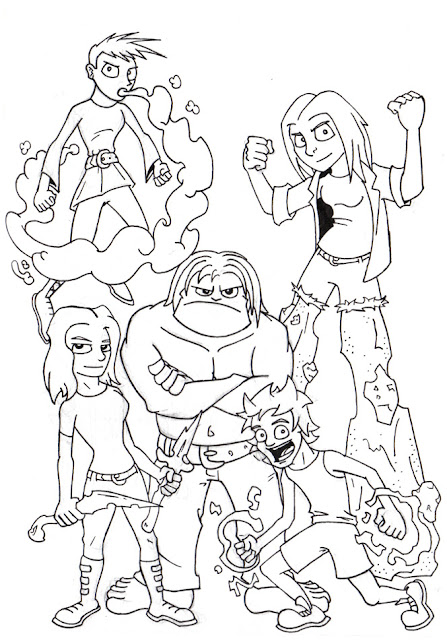 I knew the first page of my sketchbook would be The Infamous Five. I wanted to start with something solid, 'cos if I messed up page one then I'd lose all hope and tear the book up. I might have an overdramatic personality. After I'd finished the first page, I was free to throw down. But what? Then I realised (and this is going to sound obvious), I realised I could draw whatever I wanted.

We rarely do anything we want. We forget that we can do anything we want. Okay maybe not anything, you can't rent the Great Wall of China and race ostriches across it with Samuel L Jackson, what I mean is we can try at things we want. Going for that job, learning that language, playing that instrument, writing that book or drawing that comic. Because it's too hard, or we don't think we'll be good at it, or we're waiting for the right time. So as a result, we don't do it at all. Well, some of us don't. Others move past that insecurity and become rich and succesful. Or poverty-stricken failures. Or dead. It's a broad spectrum of results.

I wanted to draw superheroes. So that's what I did.

Now, superheroes are pretty much done. Every name has been picked, every power has been taken, every way to save the world has been saved... But I don't care. I like superheroes. I want my own superheroes. So I created these guys. I created them long time ago, but I'd set them aside for The Infamous Five. But I was working now. My time was gone, my energy depleted, all I had left was this sketchbook at lunch time. For the time being, all I have to do is keep drawing. So I drew the superheroes I'd come up with in college, characters I'd only drawn sporadically since. And it was thrilling to draw them again.


It'd be pointless detailing names and story, enthusiasm is always killed when you tell everyone your idea before executing them. I'm keeping it vague. Besides, if you can't figure out their powers from what I've drawn here then I've failed anway. On the left, I'm trying to figure out the face for 'Strong Guy'. I wanted him monstrous, but still perceivably human. Some were too monstrous. Some were too human. Others, I just didn't like the haircut... that's a similar process to the dating scene when you think about it.

As for the girl, I wanted her grumpy because... well she has smoke pouring out of her mouth. Wouldn't you be grumpy if that happened? Well. I suppose it depends what you were smoking.


These guys, I already knew how I wanted them to look and dove straight in. Want more? I've got more. See you tomorrow.

SKETCHBOOK FURY, Part 1 - "Where the hell have you been?!" 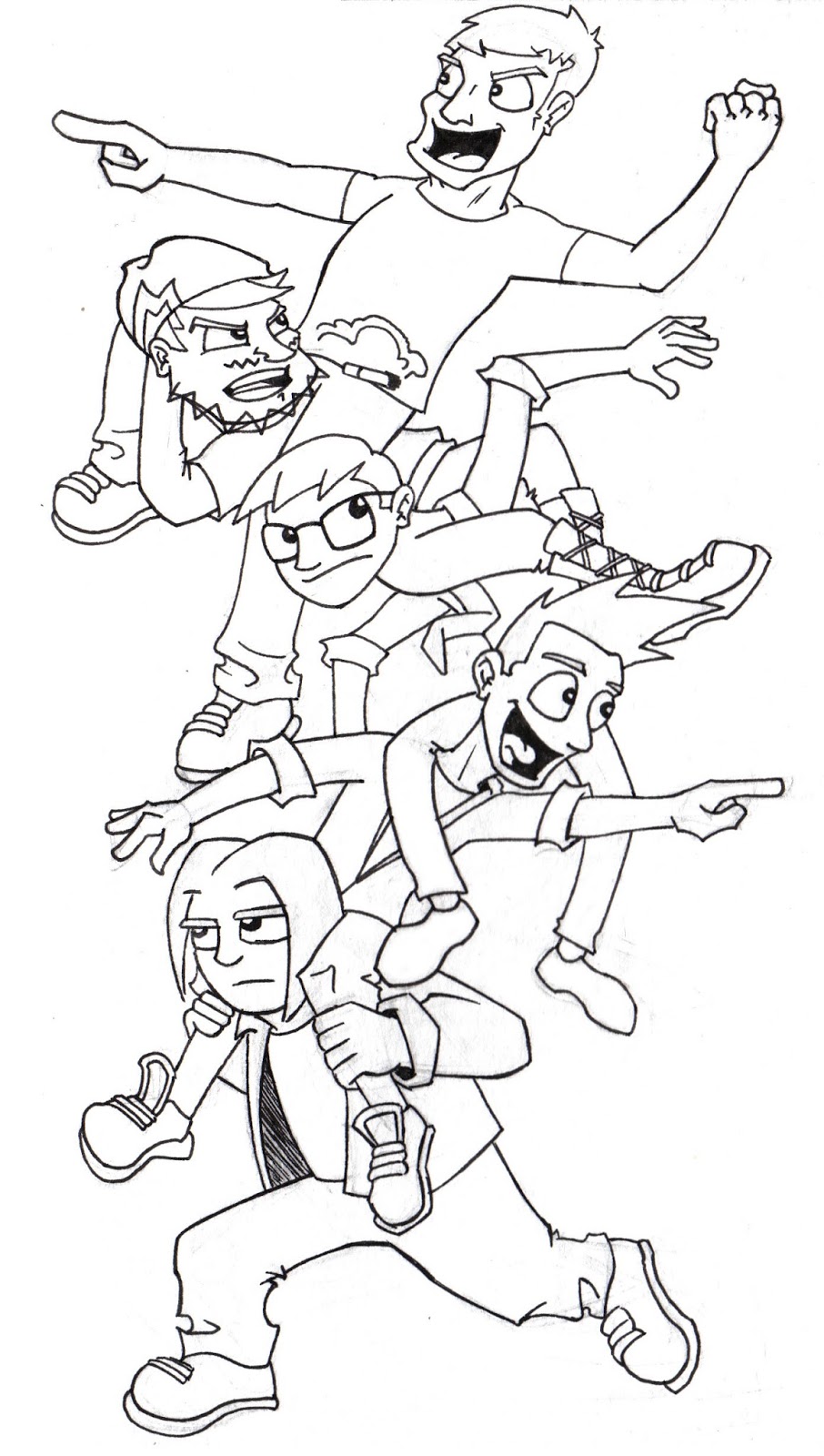 'Frantic Sketching' would be more accurate, but 'sketchbook fury' sounds better. Hey! It's been a while. I always hated reading that on other people's blogs. "Been a while? I don't care what your excuse is, no excuses! You can find 5 minutes to draw!" And now I am that guy. So, you know... here are my excuses.

I started working at my old university's shop. We sell food, books, digital equipment and most excitedly for me, ART SUPPLES. It's pretty sweet. It's also exhausting. We're a small shop in a big uni. I'm on my feet all day, always moving around, lifting things or talking to students and staff. Plus, I gotta commute there for an hour. Then I commute an hour home, as is the nature of these things. I don't know who's reading this. Maybe you're an army lieutenant who spent 4 months sweating inside a dessert tank protecting a small village/oil pipeline, or a doctor in Africa who's been kidnapped by rebels threatening you with execution unless you cure their tyrannical leader's pox. 'Poor you.' say the lieutenant and doctor. 'Having to take a little train ride to your little shop.' Alright fine Captain Lieutenant and Professor Doctor, your jobs are harder than mine, but mine still leaves me exhausted. It's not my fault you forgot your tank keys or mistook the rebel insignia for the Baskin' Robbins logo and walked right up to them asking for a banana caramel, is it? No it's not.

Sure, having this job means I've got more money than I've had in a while. I can finally afford banana caramel. But for a while I wasn't producing any work. At first it was just a few days. Then a few weeks. And with a slow creeping horror I realised that unless I do something this could be how my life goes forever. So I bought a sketchbook.

I mean, that part wasn't difficult. Like I said. We sell art supplies. The problem was finding time and energy. See before, I had the entire day to draw. And oh how I used it. I used the whole luxurious day to perfect and obsess over every line to my heart's content. I'd draw on my computer, or piece of paper I could file away nicely into pre-designated folders. I can't do that now. I have limited time. Lunch breaks, tea breaks and evenings if I can muster the strength when I get home. I have to draw quick. I can't focus on details, I just have to produce a thing. I was even brave enough to use ink. It's actually been a good experience. This is how an artist is supposed to practice, and now I've been forced into it. The result? I have my first completed sketchbook.

It was a small thing, to start me off. Cheap. A few pages. And I drew purely for fun. I drew my characters. Some you know (that is of course The Infamous Five right at the top) and some you don't. I don't feel ready to show them. Perhaps you're not ready to see them. But like I said. I'm rather pressed for time. But not so pressed for time I can resist doing this in 3 parts. See you tomorrow!
Posted by Gnarlee at 21:20