I decided to have a crack at animating!

I chose the word 'crack' because it deliberately downplays how hard I'm trying. Because if this doesn't work out, then it was just a crack! It wasn't a huge investment of my time, energy and emotions. Like the crack of an egg, or crusty bread, or biscuit, or - I think about food when I'm emotional.

It was a huge investment though. Ironically, it's been quiet around this art blog because I've been busy doing art. If you follow me on Twitter, you'll see I occasionally gathered up enough energy to blurt out some pixels about what I'm doing. But it's time I spoke about it properly.

I'm working on a 3 minute short film, about a wizard gathering ingredients for a spell. It's a comedy, and the story will be presented entirely visually - no dialogue! I don't want to go into any more detail than that because... well, like I said, there's no dialogue. If my story-telling skills are any good you should be able to see what's going on when you watch it, right?

I'm proud to present moving image on this website for the first time, a sneaky peak at the animation!

I was able to present the work-in-progress film at an exhibit at UEL Docklands, along with my comic The Infamous Five! I was promised a bigger screen at the time, but that little thing is what I ended up with. If you've ever used a dating app, you'll understand my disappointed there. 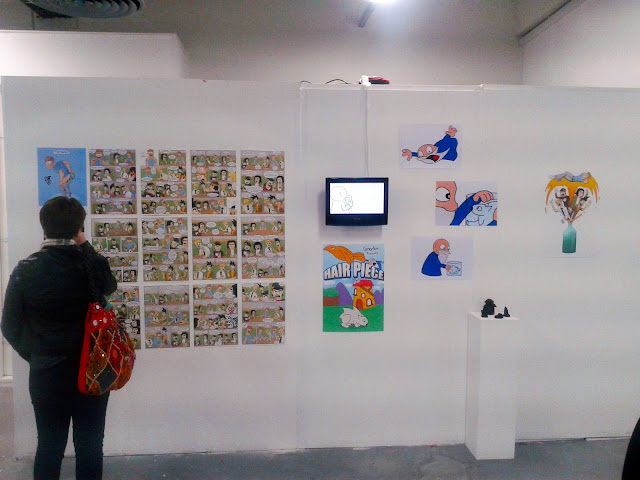 And finally, I got some business cards made! I asked my Twitter followers - as a joke - if I should include 'love machine' on there. I should've known they'd say yes. By that time I felt not doing it would have been an insult to the handful of people who pay attention to me. Also, to be honest, it's true. I am a love machine. 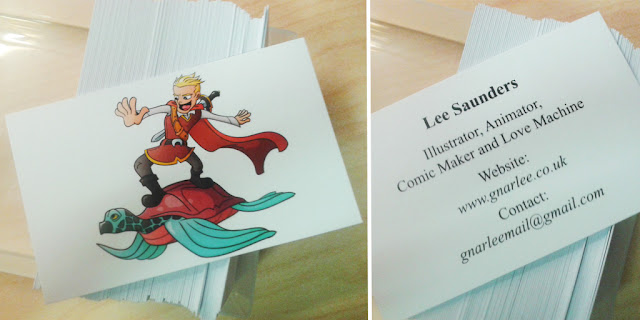 Unfortunately, I got these made after the exhibition, when people interested in my could have taken them. Hey, I said I'd gotten busier. I never said I'd gotten smartier.
Posted by Gnarlee at 23:47