Have I talked about sex and violence on this blog before? At most I think there's been innuendo and fisticuffs. I hope you understand that 'fisticuffs' represents the violence aspect of this discussion, not sex. I've got 2 things to talk about today and whilst I wasn't deliberately trying to be 18+ about it, that's what happened. So, don't expect the usual bloodless battles. Don't expect any innuendo. There's a hole lot to get through, so let's thrust a head.

I love movie trailers. Sometimes, they're better than the movie. I'll watch movies trailers to films I've already seen, films that came out years ago, just 'cos they get me so pumped. This month I wanted to get more views for 'Who Wants to Play', the show I make with my buddy Matt. So I made a trailer for our next series. I started on a whim, but I got really into it. I worked 7 hours straight, up until 3am. The time flew by. I can't remember the last time I'd been so excited, so motivated working on a project. I'm super proud of how it came out.


Now the question is, did it work? Well, kinda. We got more views! But only for the trailer. Views for the episodes themselves stayed about the same. Getting a following is hard, guys.

I used to draw that stuff years ago, when I was being hesitant about real sex. Or maybe I just couldn't get any, I can't remember. A few of the artists I follow on Twitter, some of them quite big names, have been openly sharing their own naughty cartoons. So I'm feeling braver about sharing my own. Also I'm poor and I hear there's money in it.

I know not everyone's comfortable with this kind of work and I respect that, so I won't share it here. But if you're interested and over 18, you can check it out on Twitter @GnarleeXXX 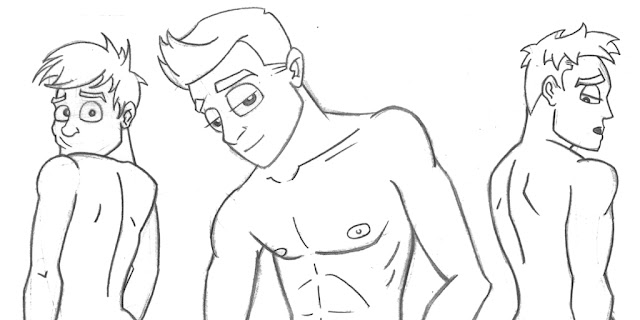