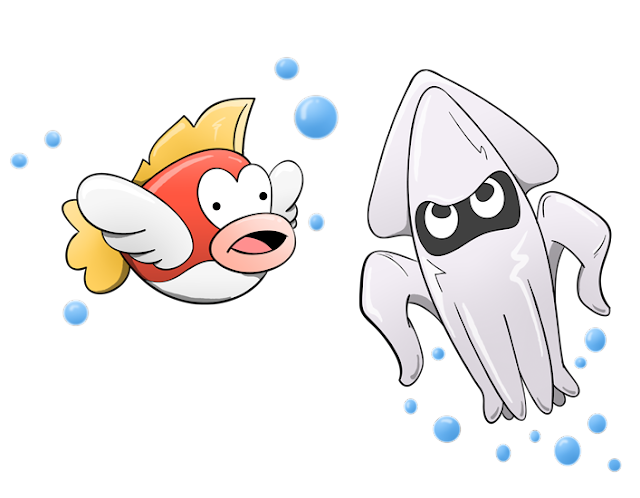 Cheep Cheep and Blooper! It bugs me that the fish is called Cheep Cheep. That's the sound a bird makes, right? It should be named after the sound a fish makes, like 'bloop bloop'. Or 'P Sherman 42 Wallaby Way Sydney'. I suppose it does have bird-like wings, but that bugs me too. Wow, I won't be happy with anything.

The wings bugged me because I planned to make the fish look dumber than he already was by having little yellow fins hanging lazily. But then I saw from the original design he actually has wing fins, so I'm kinda stuck with 'em. Instead, I just put his pupils looking in opposite directions. Simple little thing that makes him very brain-dead, something I picked up from Tyson Hesse. You should go look at his stuff! After I'm done talking about a cartoon squid from a computer game, of course.

Blooper is a stressful enemy. His movements are so erratic. Most enemies have a predictable march, so you can either plan your attack or just let 'em march right on by you. Blooper chases. He's floating gently one moment, then makes one quick darting movement after you, before floating again. I'd say he's as threatening as Lakitu in some ways, but not as threatening as Hitler. Just, you know, in general.

I didn't need to do much with the Blooper design. He already has a pretty mean look. I just brought up a couple of his tentacles to make him look more intimidating, more interesting, rather than have them all in the same direction.

As a final note; I really hate swimming levels.
Posted by Gnarlee at 07:15