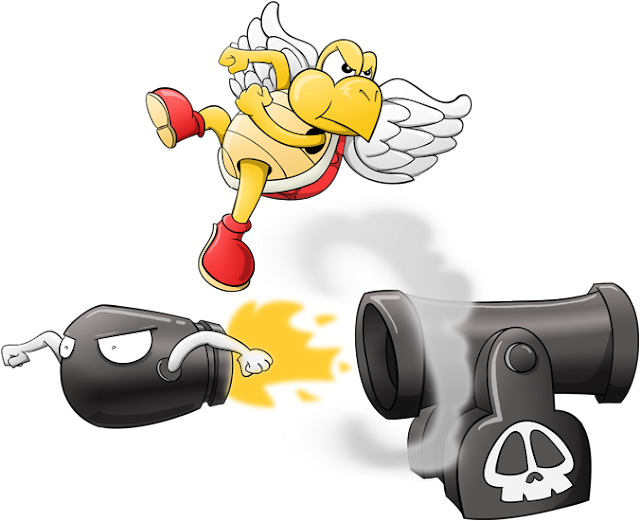 Parakoopa and Bullet Bill. This was the first instance I heard of the word 'para' when I was a kid. So when I hear about paratroopers in the military I still think of winged turtles. Not in the sense that I picture them descending on wars, but my mind seems to say "Para sorta means air, remember? Like in Mario." I don't like that I have to reference games to understand real life. At least I'd heard the name Bill before.

I think I remember when I first saw them in Super Mario Bros. It was the green one. The red ones fly, but the green ones just jump along the ground. I was startled, and whilst my dad tried to coach me into being calm and timing my attack right, it killed me. 20 years later, any character I play still reacts with panic and death to most things they come up against.

Drawing Koopas is pretty fun. When I realised I had to draw another one to complete my run on Mario bad guys, the winged versions, I thought it would be a bit dull. But their big cheeks and pointy beak make them a fun shape. Their wings are weird though. I wanted to draw wings my own way! Expanding, with individual feathers spread out. These were like a letter C with feathers stuffed in them. Still, that was the task I set myself. And I really like how they came out. There's something 'compact' about them, and I think the shadows and lighting works really well.

Bullet Bill. "Bill." Yeah, it's a pretty pedestrian name for a bad guy. They're easy enough to defeat, just a bop on the head, but the problem is so many come at once. It was tempting to include a big toothy grin, which they have on occasion, but they didn't grin in the original game. I went back and forth on the idea. Stay faithful to the original, or be creative? Well, I could do both. Without the mouth, a challenge lies in putting as much expression into the eyes and arms as you can. Gotta be creative to achieve that.

The arms bother me. Not the arms I drew, obviously, the arms I drew are fantastic. But the fact he has arms bothers me. He's meant to shoot through the air! If this was an actual projectile weapon, arms would just cause wind-resistance!

Oh, how about that? Sometimes I can reference real life to games instead.
Posted by Gnarlee at 00:17