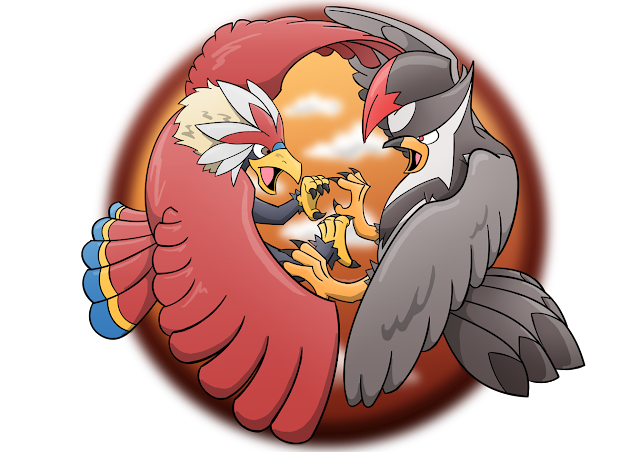 Looks like I did set the third drawing someplace else; two fierce birds fighting in the sky. Or maybe they're just going in for a hug, who knows? I should know really.

Braviary is another Pokémon from the latest games that makes me think the 5th generation is the best. I love the shape of him, the colours, and the way those feathers sprout from his head. He seems to be based on a Bald Eagle which, along with the red white and blue colours, is associated with modern America, but the headdress is the style of native America. That's just a cool idea to me.

Staraptor, well, I mainly picked him because I hadn't drawn one from the 4th generation yet. I'd previously regarded it as just being fat and grey. But I wanted another bird to draw here, and it's bulky size and blade-shaped hair made it seem a worthy opponent. And after drawing it... yeah, I suppose it's not too bad really.

I usually like my skies to be bright blue, but for each drawing this week I wanted the background "plate" at a different colour and angle. The grass was flat 'cos the characters were fighting on top. The water was diagonal 'cos the characters can fight both on and beneath it. It made sense for the sky to be straight on. The dusk colours are pretty dramatic for the fight, but it also a good symbol of ending... because that's it! The end of Pokémon week.

Maybe I'll draw more at some point in the future. The 6th generation games come out soon, right? Pokémon X and Y. Maybe I'll draw some of those. Or maybe I just mentioned that to make this blog show up on search engines, who knows. I should know really (yes, that is why I mentioned that). Anyway, what are there, another 100+ new ones? I think they'll always introduce more monsters then I'll have time to draw...