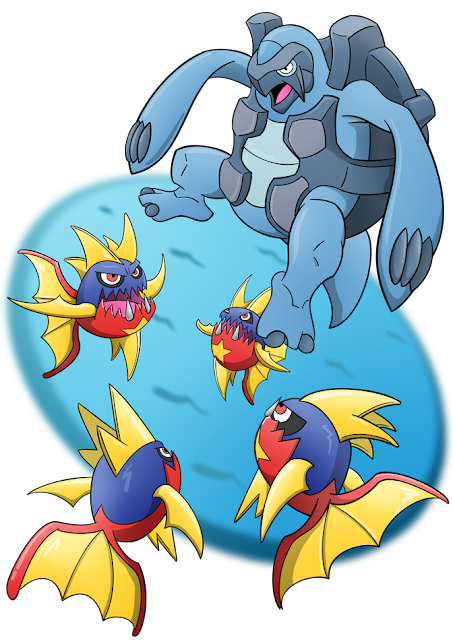 Gamers often complain about the newer generation of Pokémon. "Nothing can beat the 1st generation" they say, as if Diglett and Bellsprout were design masterpieces. Although I have to admit, they were right about some of them. Eventually, even my tolerance gave out by 4th installment when, halfway through, every monster I came across seemed little more than smiley faces on shapes. Chingling? Bronzor? Come on.

But the latest series... am I imagining this, or did they throw more oomph into the 5th generation? Overall, I prefer them to the originals. Man, in gamer terms, that's probably as controversial as saying I prefer North to South Korea. Pokémon Black/White just feels so fresh. All the monsters were new, the graphics were given a big kick... Okay, so there are still some stinkers littering the species. But there are far more knockouts.

I was worried his armoured shell, which really makes the design for me, would be really frustrating to draw. But it was pretty painless. That said, I think I was so concerned with getting it right I didn't drift too far from Ken Sugimori's original drawing. I usually like to put more of my own spin on things. I was at least able to do that with the Carvanha swarming beneath him, who I also thought were pretty cool from 3rd gen.

So. The previous drawing took place on grass. This one in water. I suppose I should set the 3rd somewhere else too? I'll think about it and get back to you on Friday.