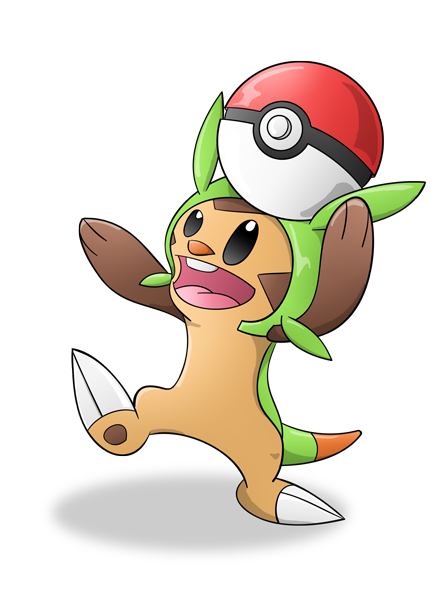 Guess which game I've been playing recently? That's right, Grand Theft Auto 5! But also Pokémon X. And it's such a joy. It's what fans have wanted ever since the first Pokémon games were released in 1996. A fully animated, three-dimensional world to move and battle in. It shouldn't have taken 17 years to get here, but it's here and it's beautiful.

Guess which starter I chose? I nicknamed him Pip. I tried to nickname every one I caught but that didn't last. "Furfrou? That's a stupid name! I'm gonna call it... uh... okay, Furfrou will do." I haven't let him evolve yet. He's too adorable. There's also the fact that a friend of mine tweeted "Oh god I evolved Chespin and now he's hideous why god why". I can't do that to Pip! But another friend described his third and final form as badass, so maybe eventually. I can swap adorable for badass.

I could check online myself of course, but that's not how I like to play games. That's also why I'm finding the game such a joy. Near-everything is a discovery. I already heard about mega-evolutions and the new 'Fairy' type, but I didn't know you got to choose a second starter. A Squirtle nicknamed Crusty, if you're wondering. And then there was the finding of Pokémon hordes, Pokémon jumping out of grass instead of waiting for you to walk in, and the new Pokémon themselves. Fletchinder, for example, is one I'd always hoped for: a fire-type bird. But I can't have two fire types on my team, so there's gonna be a difficult moment in the future where I have to choose between her and Litleo...

I probably add more drama to my playtime than I should be.

Obviously, I called the human character Gnarlee. And I'm rather enjoying his friends referring to him as 'Big G'. I might ask my real friends to do that.
Posted by Gnarlee at 17:38