Wolverine Slices Up a Tin Can 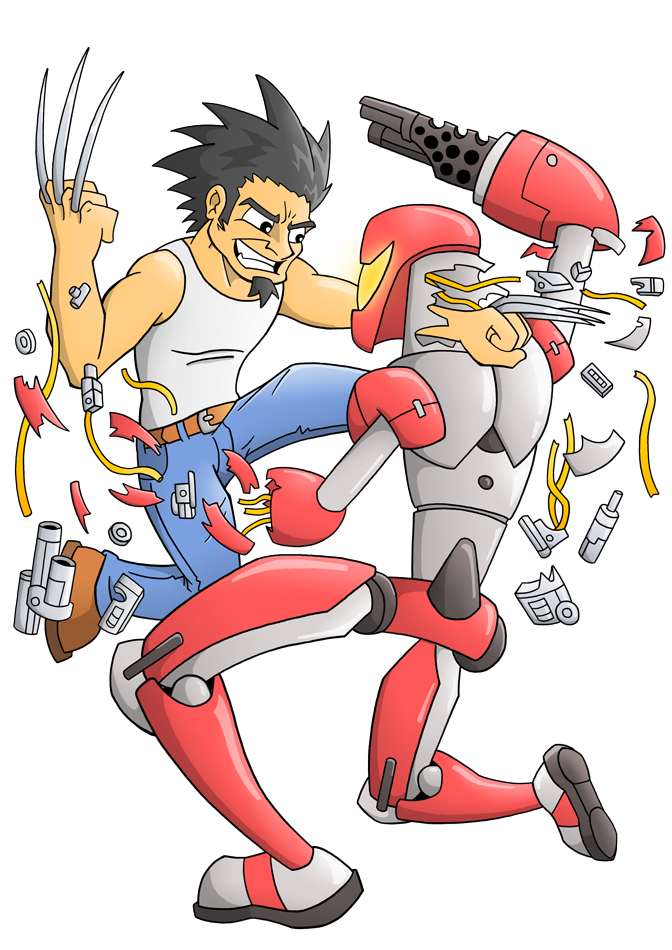 I really liked the new X-Men movie, Days of Future Past. So much so that Wolverine was the next thing I drew. I didn't mean for it to become a fully coloured thing, yet here we are.

Days of Future Past is what the movies should've been this whole time: big. I really liked the first films but I felt like they had a small scope, feeling much more like TV episodes than movies. Although, they had to be like that in the beginning.

When the first X-Men movie came out in 2000, superhero movies weren't the cinematic trend that they are now. There'd been superhero movies before of course, everyone knew who Superman and Batman was. They'd happily buy a ticket for them. But only comic fans knew who the X-Men were, or kids like me who got most of their knowledge of X-Men from the 90s cartoon. Let's take a moment to listen to that perfect intro.

The filmmakers couldn't rush into this high concept and assume the broader public would want to see it. They had to introduce this very carefully. I was 15 in the year the first movie came out. I was at an age where I still valued the fun of superheroes and all the visuals, but I wanted them presented more maturely. So this approach by Bryan Singer to turn the X-Men intro something a larger audience would enjoy suited me just fine.

This wasn't men and women in bright costumes trying to save the world from a cackling villain. This was a smarter, cooler look at people with powers. This was real people, with real dialogue and real conflicts; and yet all the fun and visuals were still there. I loved it. I expected as time went on the franchise would become braver and do bigger things. But they never did. They explored other areas of the X-Men world and I enjoyed the sequels, but I still felt they weren't doing as much as they could.

Finally, with Days of Future Past, it feels like they're letting loose. Maybe it was The Avengers that helped them do that. Joss Whedon created a massive, unapologetic superhero film. Bright costumes saving the world from a cackling villain. It certainly made me realise you don't need to be so real all the time. Maybe it taught Fox too. So on top of the X-Men's character focused, thoughtful atmosphere, we got the high concepts of giant robots and time travel. It was everything I wanted.

I am slightly disappointed that the next film, X-Men: Apocalypse, is going to be another prequel. I feel the original X-Men cast was perfect. James McAvoy and Michael Fassbender are great as young Xavier and Magneto. But I want to see more Patrick Stewart and Ian McKellen playing those roles. I definitely want more Kelsey Grammer as Beast. You know that final scene at the end of Future Past, where Wolverine was walking through the school and saw Cyclops, Jean, Storm, and the rest of the X-Men? I want to watch a film about that school, those characters, on the same scale as what Future Past was. Especially if the next film is about their greatest villain.
Posted by Gnarlee at 16:45