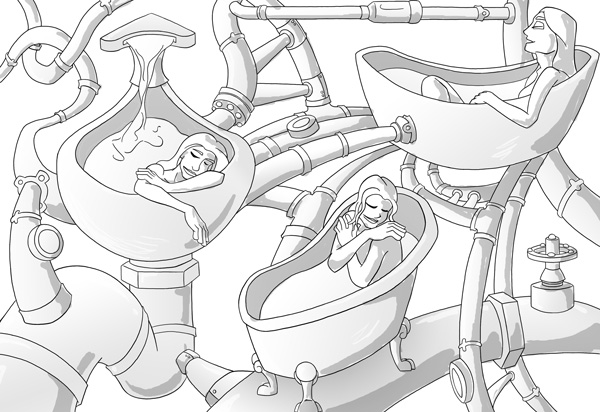 I wanted to do something a little grander, so worked on this fantastical scene. It's based on 'Armilla', a city described in a book called 'Invisible Cities' written by Italo Calvino. I'll let him explain:


"Whether Armilla is like this because it is unfinished or because it has been demolished, whether the cause is some enchantment or only a whim, I do not know. The fact remains that it has no walls, no ceilings, no floors: it has nothing that makes it seem a city except the water pipes that rise vertically where the houses should be and spread out horizontally where the floors should be... Abandoned before or after it was inhabited, Armilla cannot be called deserted. At any hour, raising your eyes among the pipes, you are likely to glimpse a young woman, or many young women, slender, not tall of stature, luxuriating in the bathtubs..."

This was something of a personal achievement. As I mentioned in the beginning, I've spent most of my time practicing drawing, not all the other stuff such as inking. This was an inking challenge I hadn't done before. SO many curvy lines. But I did it. There's a lot to colour here and a background to work out, the other thing I need practice on, so this is still in progress, But we're halfway through the week now and I didn't want to leave the update any longer.

So enjoy for what it is! I'll try to finish this week and update the blog when it's done.
Posted by Gnarlee at 22:16