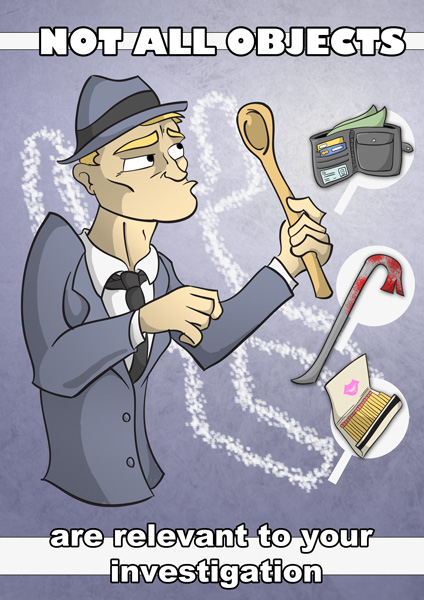 L.A. Noire. I bought it this year. The atmosphere of the game is fantastic, the makers really put a lot of effort in. But I still thought it was hilarious when the main guy picked up random crap in the house and gave it the same scrutinising glare as he would a blood stained weapon or useful clue. This is basically me as I play the game, picking up every object in a room before the 'not all objects' message comes up on the screen, which is a gentle way of saying "For fuck sake, the victim was not stabbed to death with a box of soap powder."

I deliberately made no effort to get the character looking like Phelps, I just thought the screen message was so funny it'd make a good poster regardless of whether you've planned the game or not.

Because I was going for a 'poster' look this became my first graphic piece rather than a flat out drawing of a character on white background. I don't always want to draw posters but maybe I can use graphic elements in future stuff to make 'em more interesting. We'll see next week.
Posted by Gnarlee at 22:02