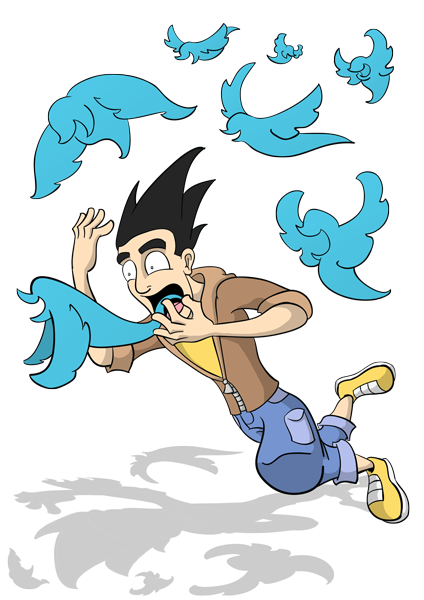 I hit my hundredth tweet over on Twitter! Or at least I will, when I tweet about this picture. Twitter is quite the phenomenon, becoming an unexpected platform for free speech. Or at least it was, until people started getting arrested for speeching freely.

Despite the number I don't actually tweet much, using it only to announce some new art on this blog or over at The Infamous Five website. So basically that means I go on Twitter to tell people to get off Twitter.

That's not what people want. Not really. Twitter isn't popular because people can finally talk about all that war and corruption they're angry about. It's popular because it brings you closer to the people you admire more than anything ever has in history. Your favourite actors, your favourite singers... No more of that spraying your clothes black to hide in the tree with the binoculars, celebrities are now directly on on YOUR friend list. Sending messages directly to YOU. But you don't care about their tweets for a new movie or song, you know, those things that got you interested in the first place. You want to know what they're doing! What they're thinking! To Hell with those slow gossip magazines, you've got Hugh Jackman just a click away about to tell you he's off to the beach! And look! He even instagramed a picture of himself in his trunks. All for you.

And not just that, celebrities LOVE that instant attention from a mass audience they start telling you their every meal, their every private thought and crazy mood. It's hot gossip direct from the source! Even newspapers report what these people say on Twitter as NEWS. But you had the celebrity's tweet on your feed first, and you know what? You even get to be a part of it. In fact, you have a new dream. You don't want to write a short story or learn guitar. You want to be retweeted by Stephen Fry. Every day you'll tweet him but does he ever see them? You hope so, you yearn for his attention the same way you used to yearn for a lover's caress.

I'll keep using Twitter and the people who follow may have noticed me trying to loosen up about the whole thing. But Twitter wants to be it's own thing. You don't just 'say' something, you 'tweet' it. Your idea, your joke, it becomes a 'tweet' and that seems like a waste. I can't even bring myself to hashtag 'gnarlee' it just feels so tacky. Imagine it with anything else.

@churchill We shall never surrender. #bringiton

So yeah. There are my thoughts on Twitter. It was 2961 characters more than Twitter would allow. The one solace I can take from this, however, is that it'll probably be replaced by a new fad called 'Zabloot' or something. "I just got a Zabloot from Gnarlee! I can't wait to Zableet it to all my Zablaaters."
Posted by Gnarlee at 22:03