Sometimes I forget I live near a country park. Or rather, that the country park is something I can walk through. I forget this usually around Winter. Cold wind rustling through dark trees isn't inviting... But recently the sun has remained in the sky beyond 4pm, which always takes English people by surprise. So last week whilst I was out buying fizzy drinks (based on their sugar content as opposed to their ability to quench thirst), I looked toward the park and realised "I can go toward the park".

The sun lit up the green gloriously and in my park much of it is left... some would say untidy, I prefer wild. And I love it. Neatly cut grass and trimmed hedges aren't nearly as enjoyable. Maybe at garden shows, but isn't the reason we have parks in confined urban areas to have somewhere we can feel free? I've spent a long time cooped up at home recently, a lot of my work and leisure time is spent staring at one screen or another. Walking a path down past nature on a bright day wasn't just relaxing, it was a relief. I've gone nearly every day since.

On that that first day, after admiring the scenery for a while, I was reminded of the movies, games and books that take place in wild areas. The journeys characters go on. And suddenly, the park wasn't enough. All I encountered on my journey was someone walking their dog and a bike rider. Where were the wizards? Where were the wild beasts and hidden caves stocked with treasure?! I'm an adult, really, I am. I wasn't expecting any of this stuff. But clearly, relaxation wasn't enough.

So when it came to drawing my second fantasy image, I kept that in mind. What would I like to see when on one of my walks? One result was this: 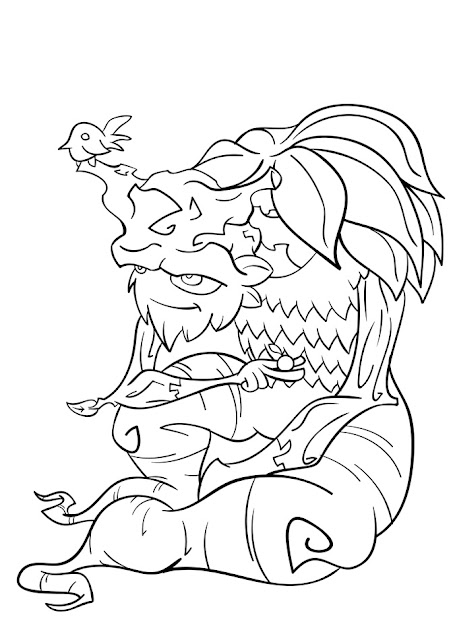 I took the scenery and made a creature out of it, something sentient and approachable. I haven't invented any story for it, as I said yesterday I just want to draw freely. And in this image, I wanted the drawing to conjure up a sense of adventure. What secrets of the forest could it reveal? What could it give you on your journey? I feel compelled to remind you once again that I'm an adult. Really.

I wasn't sure what to title this at first, because he doesn't look like a 'plant man' and it seems cruel to call him a 'plant beast'. Yes, that's right, I don't want to offend a drawing. Instead, I imagine him telling forest walkers who discover him that he's a 'plant being', and when they ask "What are you doing?" he'll respond "Being a plant."

See you tomorrow!
Posted by Gnarlee at 23:27