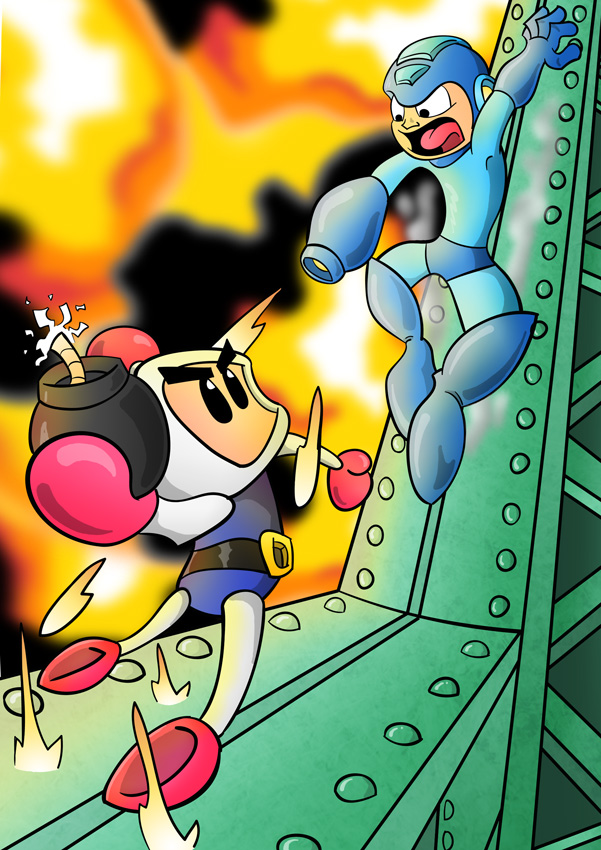 Megaman vs Bomberman! A pairing based on their similar machine/man appearence. Is Bomberman a machine? Japan have a way of designing characters and not worry about what they actually are. I envy that. If I was told to design a bomberman, time would have been spent staring at my sketchpad at one point thinking "what kind of nose would he have?"

The first game of the Megaman franchise I played was Megaman X. I remember loving the intensity of guns, robots, vehicles, explosions... I wasn't into that sort of thing usually, you'd never have seen me spend pocket money on Metal Slug for example. But the cartoon blue man brightened things for me.

Super Bomberman 2 was the first I played of that franchise, and what's to say? If you've played any Bomberman you'll know why I loved it. Actually, I can tell you that I liked the music so much I recorded it onto cassette tape and mum got mad 'cos it wasn't "real music". She'd seen me sitting around with headphones and was proud 'cos she thought I was finally appreciating musicians, but it was just beeps, boops and bombs. Ha.

Of course now I can type almost any game and level I want into Youtube and some fan has uploaded the music for it, from 20 years ago. Right now as I type, for the first time in over a decade, I'm listening to that music again. It's fantastic, knowing that I wasn't the only one who loved it. Mum was right about bands and singers of course, but still, we knew. We knew the people who made our game tunes were real musicians too. Generations choose what their own art is. 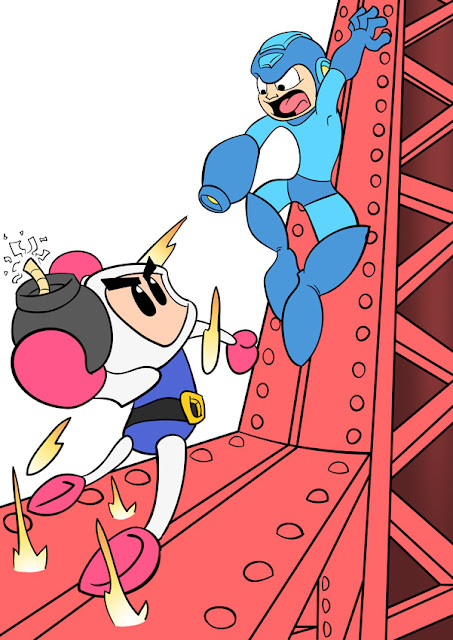 I originally went with red girders, but this clashed with Bombeman's pink gloves. It was also too reminiscent for me of the original Donkey Kong games, which took place on red girders. I wanted to focus on just these two characters and their history. Then I remembered the very first level of Megaman X where you slid down green ones. Considering I DREW him wall sliding down a girder here that may have been my plan all along but just forgot about it. See, this was actually a little sketch from weeks ago that I finished in one day on an impulse.

When I realised I could just make them green it was revolutionary in my mind. That's the thing about art, isn't it? You're creating a little world. So when you find a solution to a problem in it, you feel like you've solved a global one. Maybe you're making a little note now about this being the most pretentious thing I've ever said. I'm sure I can beat that in the future.

As you can see from the original lines, the whole image was at a straighter angle. I thought the angle was fine, but I wasn't sure about the perspective of the bars on the right. So I zoomed in and tilted everything. It looked much better, with the angle being more dramatic and the heroes with greater focus. It's interesting how mistakes can make things better. Story of my birth, really.