I started drawing a furry hood and got a little carried away. 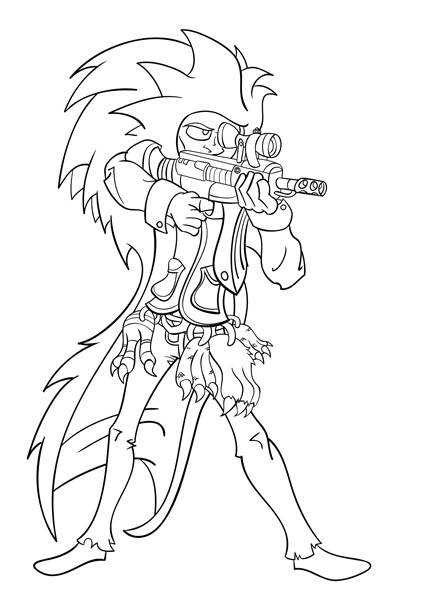 The assault rifle shows you by this point that my fantasy theme isn't entirely traditional. Well that's me baby, tearing apart your boring old values and making something sexier! Actually that's not true, originally I wanted a musket which still isn't traditional but more reminiscent of adventure, such as the kind in spaghetti westerns. An automatic weapon is more reminiscent of hostage negotiations. But the photo I found for reference had such a good angle of a man holding a gun that I didn't register it was the wrong gun. Be thankful the photo wasn't a man holding a dildo, I guess.

Even with his giant headgear and firearm I still felt there wasn't enough visual elements to him, which somehow led to me having the unusually gruesome idea of clipping various animal feet to his belt. I reckon that makes him a hunter, using the feet as trophies. Maybe you think that's disgusting but if you didn't cringe at the hood that's obviously been made by skinning some furry animal then we're probably good? We're good. Besides, yesterday I drew a smiling plant! So that's a bit of whimsy and a bit of dismemberment, I'd get bored if I just did one thing.

And there'll be a new thing tomorrow. Will it be cute or violent? I know because I already drew it. See you then!
Posted by Gnarlee at 22:24