One of my favourite things to do in drawing is to fill a page with fantasy animals and monsters. The first time I did this was because I had some specific ideas I wanted to put down, but since then it's just been a fun exercise for the imagination. I've been doing this for years and I finally made time to scan them all in. 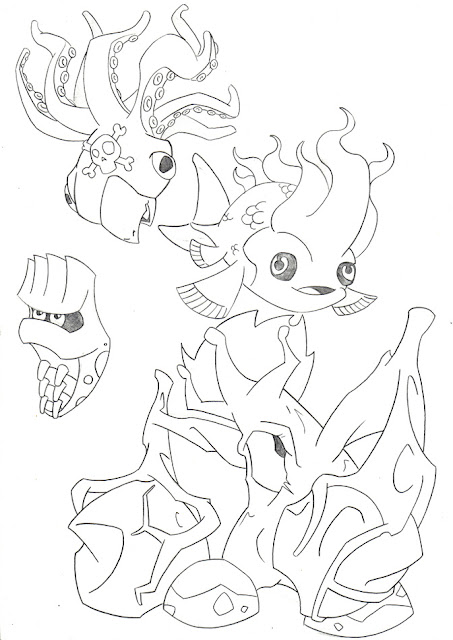 An Octopus with a skull on it. Octo-Pirate? Why not. A fish with flame-like fins, keeping the water warm without having to pee. If it peed as well as having flame-fins it'd probably cook itself. A tree that carries around boulders because, well, those branches always looked like hands to me and there's not much else lying around a forest. Carrying around another tree would be rude. And a bug with a face shaped like a fist so don't think 'drink' when people warn you about it giving you a 'punch'.

These ideas were in my head before I started drawing, though I may have come up with the bug when I ran out of space for anything other than an insect. What followed after that were pages of whatever happened when I put pencil to paper.

Thus begins the Fantasy Week 3! Updates every day, of either one or multiple pages. Depends on how good I think those pages are or how much I can be bothered to write... See you tomorrow!
Posted by Gnarlee at 21:13